All You Need To Know About the Alaknanda River

Originating in the Indian state of Uttarakhand, the Alaknanda is a Himalayan River and one of the two headstreams of the River Ganga. It is one of the primary rivers in the northern part of the country and also holds special religious significance in the Hindu religion. 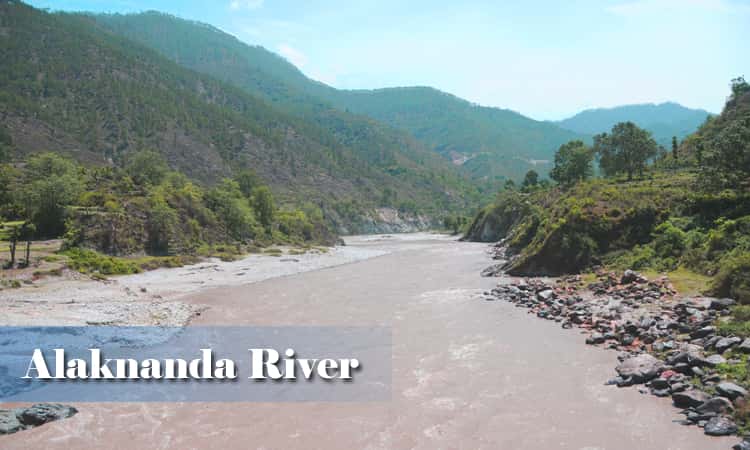 The Alaknanda River emerges from the meeting point of two famous glaciers in the Uttarakhand- the Satopanth and Bhagirath Kharak. From here, it finds its way through the village of Mana and goes on to blend with the Saraswati River, before continuing on its journey through narrow valleys. Once it reaches the Badrinath Valley, it goes on to meet the right bank tributary of Ghrit Ganga, which is the right bank tributary. Once it reaches Hanuman Chatti, the river traverses over to Pandukeshwar and then flows through wide valleys and steep terrains. It crosses over to a left bank tributary when it meets Dhauliganga at Vishnuprayag.

What Is The Religious Significance Of The Alaknanda River?

There are several important places of pilgrimage in the north Indian state of Uttarakhand and the Alaknanda River forms an important part of it. The holy river Ganga rises as the Alaknanda near the southern Himalayan region near India’s border with Tibet. As you go almost 6 km upwards from the origins of the Alaknanda to the Satopanth Glacier you will come across the famous triangular lake Satopanth at a height of more than 4000 feet above sea level. This has been named after the holy Hindu trinity of Brahma, Vishnu, and Mahesh.

Yet another place of extreme religious significance among Hindu pilgrims, Badrinath, is located near the banks of the Alaknanda River. Apart from that, several other rivers in the Garhwal region meet with the Alaknanda at different points creating the various ‘Prayag’ or confluence of the holy rivers.

How Has The Alaknanda River Helped In Energy Conservation?

The Alaknanda River has been put to use by harnessing its energy to generate electricity. The river along with its many tributaries has been used for the creation of 37 hydroelectric dams which are all in operation currently. These have been set up in regions such as Tapovan, Tharali, Vishnuprayag, Srinagar, and several others. Various other such projects are also under construction such as Kaliganga, and Singoli Bhatwari, among others. At the moment there are about 23 Hydel projects in the basin which include the Alaknanda (Badrinath), Lata Tapovan, Devsari Dam, Nandprayag Langasu, Vishnugad Pipalkoti, to name a few.

Hydroelectric dams that are in operation are:

Some of the hydroelectric dams that are under construction are:

Some of the hydroelectric dams that have been proposed for construction are:

Why Has The Alaknanda Waters Changed Colors In Recent Times?

It has been seen that the color of the waters of the Alaknanda has changed in recent times, especially where it meets Bhagirathi at Devprayag. The river has assumed a muddy hue because of the landslide and flash floods in the Rishi Ganga and Dhauli Ganga in the past few years. This muddiness is said to be due to the suspended particles in the water such as sand, clay, rocks, etc. making it look brown. This is what environmental scientists and geologists have said after careful study of the waters of the river in Uttarakhand.

Some scientists however state certain other reasons for this change. This is because, they say, both the Alaknanda and Bhagirathi rivers keep changing colors back and forth with the change of the seasons. They state that another reason behind this could be the Tehri Dam.

This dam is located on the Bhagirathi River and because of its placement, silt gets settled in the dam. This leads to the emergence of a much clear river emerges from here. However, the River Alaknanda covers a much longer distance in the greater Himalayan region when compared with the Bhagirathi. This could be a major cause for the waters changing their color as the river appear more blue-green near the glacier but gathers sand and dust as it goes further covering a far longer distance than its other counterpart.

The Folklore Associated With the Alaknanda River

According to legend, the Goddess Ganga had brought herself down on the soil of this Earth at a place called Gangotri which came to be then regarded as the original basis of the Bhagirathi. Before this, the Gangotri Glacier is said to have moved away to its current position at Gomukh.

Folklore states that the mighty Alaknanda River wrenched away and finally tore off from the outer space Ganges when it moved away from heaven. Today, it is a site of holy pilgrimage, and a lot of mystery and intrigue is associated with it. There are many tourists who find the foundation of the Alaknanda River extremely interesting and it has become an important point to stop over during the other significant Uttarakhand pilgrimages.

Which Are The Major Towns Along The Alaknanda River?

As the Alaknanda River flows, it passes by several important towns that have settled by its banks. These include:

Recreational Value of the Alaknanda River

River rafting is one of the main recreational activities that is practiced on this mighty river by tourists who visit here from all across the world. The high rafting grade of the river makes this river one of the best for river rafting on the entire planet. The origins of this famous river are also a great source of interest among visitors to Uttarakhand. Its rise from the Ganges in India is from the southern section of the Indian Himalayas on the Indian side of the border with Tibet.