The varied dressing styles of the state showcase simplicity and purity. ‘White’ is a color that Keraleans prefer to sport and the color is undoubtedly a symbol of the elements of purity, serenity and simplicity that the Malayali culture is known for. During festivals like Vishu and Onam and during wedding ceremonies, the natives of the state make sure to sport their traditional styles. When they step out in white, they grab all the attention. To learn more about the traditional dress of Kerala read on: 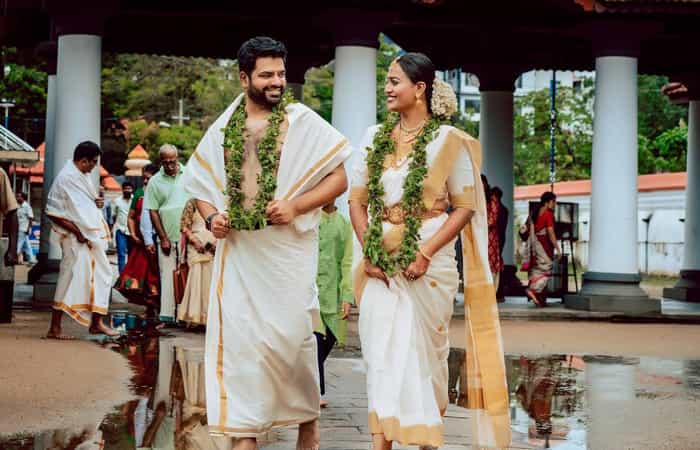 ‘Mundu’ is a typical Kerala dress worn by the menfolk. It is somewhat similar to the Lungi. The piece of cloth called the Mundu is worn by wrapping it around one’s waist. The cloth is tied around the waist with a tight knot. The rest of the cloth is allowed to drop down to reach the man’s ankles. In rural regions, a kind of Mundu called the Kasavu mundu is worn. It has a thicker fabric. The Mundu is white colored and comes with a golden border referred to as the ‘Kara’. This border can actually be of various colors but during traditional functions, the Mundus that are worn come with a golden Kara embellished with embroideries. Sometimes the men of Kerala fold the lower ends of the Mundu and tuck that part into their waist.

This manner of wearing the Mundu is adopted only when the men are involved in some kind of strenuous physical activity. While talking to elders or women, they avoid wearing the Mundu in folded style as that is looked upon as a disrespectful gesture. Kaily, a colored mundu is a kind of informal dress option for a Keralean man.

Melmundu is used on the upper body to clad the upper body of the man. It is another piece of white cloth that is worn by draping over one’s shoulders. These days, instead of Melmundu, the men of Kerala wear shirts for covering their upper body while for the lower part of the body, they still hold on to the tradition of wearing the Mundu.

Jubba is another clothing type that Kerala men sport on their upper body. It is a silken fabric with a Kara that’s either embroidered or is embellished with multi-colored gemstones.

The traditional outfit for a woman in Kerala is named as the ‘Mundum-Neriyathum’. It combines two pieces of cloth or mundus. The two cloths are mostly white or cream-colored. One of the cloths is draped around the woman’s hip while the other one is wrapped around the upper body. The cloth that is used on the upper body is called the Neriyathum’. One end of the ‘Neriyathum’ is tucked in the Mundu underneath while the other end is made to pass over the shoulders. The Mundum and Neriyathum when worn together resemble the look of a saree. For daily wears, cotton Mundum-Neriyathum is used but during special occasions, the garb comes in silk fabric adorned with intricately embroidered borders.

The borders mostly exhibit green, red or maroon colors. The Mundum-Neriyathum is generally paired with a fitted blouse. The tradition was to tuck one end of the Neriyathum into the blouse but nowadays it is made to fall over the woman’s shoulders like a pallu.

What Do The Little & Teenage Girls Of Kerala Wear?

‘Pattu Pavada’ is the traditional dress that the little and teenage girls of Kerala wear. It is a dress consisting of a long skirt paired with a blouse. The material used for making this dress is silk. But nowadays, only during traditional functions is this dress worn. Youngsters of the state prefer to wear more casual clothing that’s both trendy and comfortable.

What Do The Muslims Of Kerala Wear?

Muslim men wear the traditional Mundu and Jubba but also make sure to wear the Kulla, a typical cap that differentiates them from the Hindu menfolk of Kerala. They even wear kurtas or shirts to cover their upper body while for the lower body, they mostly wear the Mundu.

Muslim women too embrace the traditional dresses for women in Kerala but some make sure to sport a blue or black burkha.

What Do The Christians Of Kerala Wear?

Christian women of Kerala sport a special kind of Mundu style called the pleated Mundu. They also wear skirts, tops and dresses. The Christian men of Kerala wear shirts and trousers mostly but they too embrace the traditions by wearing the Mundu-shirt combination during various occasions.

The bridal attire of Kerala is unique and definitely needs a mention. When a Kerala bride dons the bridal attire, she becomes an epitome of grace and beauty. The bride usually drapes herself in pastel cream or white colors and uses gold jewelry to compliment her ethereal look. Decades back, gaudy gold ornaments were used by the Kerala bride but these days, they prefer to sport understated jewelry pieces crafted out of gold, silver, platinum, diamond, rubies, etc. Some of the Hindu Kerala brides wear the gorgeous heavy Kanchipuram sarees paired with classic gold jewelry and floral hair decorations. These South Indian silk sarees made out of high-quality mulberry silk are embellished with golden threadwork or Zardosi or Kundan all over and usually come in vibrant colors like magenta, maroon, and orange.

Brides of other religion too exhibit a unique look. In the past, the Christian Kerala brides used to wear a white silk saree teamed up with a white blouse. But, with the changing times, they have started wearing a gown in white and veil and they carry a bouquet of flowers in their hand. They wear lightweight jewelry to complete their look. The Muslim Kerala bride prefers to embrace the ethnic styles. She usually drapes herself in a gorgeous silk saree that’s heavily embroidered and has a richly crafted border. She also uses heavy makeup to round off her getup. A golden veil too is added to her trousseau to add a traditional appeal to her garb. Some Muslim brides of Kerala prefer to wear a Silk Lehenga while some other will be sporting purdah as per their family traditions.

The groom of Kerala either wears a traditional shirt & Mundu or a suit. The Christian groom usually wears a suit and blazer while the Muslim groom dons a white colored Mundu or heavily embroidered Sherwani.

Fabrics Used For the Costumes of Kerala

Kerala’s textile industry is a prominent revenue earner. The industry focuses mainly on the handloom sector. The handloom fabrics of the state are reputed for its variety as well as quality. The Kerala textile industry consists of activities such as spinning, weaving, cloth and garment making. Silk and cotton are the two major fabrics produced in the state and the traditional dresses of Kerala are mostly made out of these fabrics. There are several weaving stations statewide and Thrissur is the place that boasts of holding the essence of Kerala textile industry.

How To Kerala People Accessorize Their Costumes & Look?

During festivities and special ceremonies, both the men and women of Kerala wear floral garlands around their neck. To complete their ceremonial attire, women deck their hair with beautiful flowers.

Gold ornaments of Kerala featuring depictions of various gods and goddesses are utterly mind-blowing. These are actually fantastic temple jewelries that Southern India is famous for. The Manga Mala Necklace, the Mulla Motu Necklace, the Pulinakham Mala, the Karimani mala, the Lakshmi mala, the Palakka mala, the Poothali, the Pathakam, the Elakkathali and the Nagapada thali are some of the distinguished neck ornaments of Kerala. Apart from these magnificent neckpieces, the other traditional jewelries of Kerala include the anklet- Kolusu, the armlet- Vanki and enchanting earrings called the Jhimkis.

With the winds of modernity blowing everywhere the traditional costumes of Kerala have given way to more modern and casual outfits such as shirts, trousers, skirts, salwar kameez, churidars, sarees, jeans and dresses. However, during traditional ceremonies and festivities, the Keraleans step out in their beautiful traditional attires.

Tourists to Kerala may wish to get immersed in the typical Malayali culture thereby wanting to dress up like a true-blue Keralite. If you are in Kerala or have plans to set out for a Kerala tour in the near future, don’t forget to try a typical Kerala look at least once. The minimalistic yet eloquent clothing of Kerala will surely make you stand out!