Sikkim, one of the states of North Eastern India is a beautiful state showcasing a lot of things. Beauteous nature, cultural richness, lip-smacking delicacies, mind-blowing dance forms and last but not the least, vibrant attires make Sikkim stand out. Sikkim is actually inhabited by multi-ethnic groups. That’s the reason why the state’s cultural diversity and admixture of traditions gives way to multiple dressing styles followed by the various communities.

Each community has its unique and very own dressing style which sets it apart from the styles of the other communities. The various outfits worn by the Sikkimese people not just exhibits their culture & traditions but their religious beliefs and social status too. In other words, this magnificent Himalayan Kingdom has an identity of its own. Here Buddhism and Hinduism peacefully coexist imparting the state with a clothing style that the Sikkimese people are known for.

When it comes to the Sikkimese population, the three major tribes residing in the state are the Nepalese, the Bhutias and the Lepchas. The traditional dress of Sikkim are actually the outfits worn by the people of these three communities. However, there are some common elements that define Sikkimese attire on the whole. Intricate designs, vivid colors, use of beads and embroidery characterize all types of Sikkimese clothes.

In this article, you’ll get to know in details about the various traditional dresses of Sikkim. Read on:

The Lepchas are the original denizens of Sikkim and the outfits they wear showcase their culture. Lepcha men wear the Dumpraa. It is a striped waistcoat coming in various colors. The waistcoat is pinned on one shoulder. Gyatomu, a kind of waistband is used to hold the waistcoat together. Sumok Thyaktuk, a cap too is worn with the attire. Trousers of ankle-length and white colored shirt too are worn with the Dumpraa. The Dumpraa comes in three types of designs. Read below:

The Lepcha women wear the Dum-bun, also known as Dumden. It is an ankle-length dress made of silk. It is teamed up with the Tago, a loose-fitting blouse that’s brightly colored. Naamrek, a kind of waistband holds the blouse in place. Gorey, a white colored headgear too is worn by the womenfolk to complete the traditional Lepcha look. 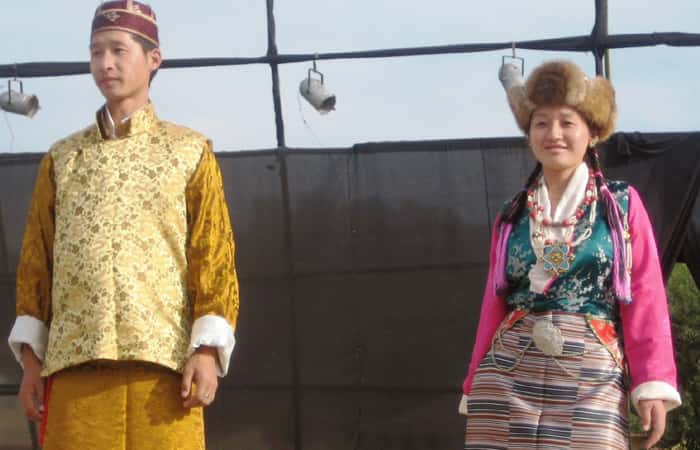 The traditional dress of the Bhutia tribe of Sikkim is one of the major cultural dresses of the state. These dresses were worn by the Namgyal Dynasty of Sikkim. Namgyal Dynasty had been the rulers of Sikkim once upon a time. These dresses thereby represent the identity and history of the Bhutias. The first and foremost Bhutia attire is the Bakhu, also differently referred to as Kho. Both Bhutia men and women wear the Bakhu. It looks quite similar to the Tibetan Chuba. It is actually cloak-type attire tightened at the waist by means of a belt and tied neatly at the neck. Bhutia men wear the Bakhu in this fashion. The women on the other hand, wear the Bakhu with ‘Honju’, a full-sleeved blouse made of silk. They also wear a jacket referred to as Kushen or an apron called Pangen. Along with the Bakhu, men of the Bhutia community wear a waistcoat called Jya Jya, and a shirt known by the name of Yenthatse. To complete the look they use accessories like a cap referred to as Shambo, a belt referred to as Kera and leathr boots referred to as the Sabcha. 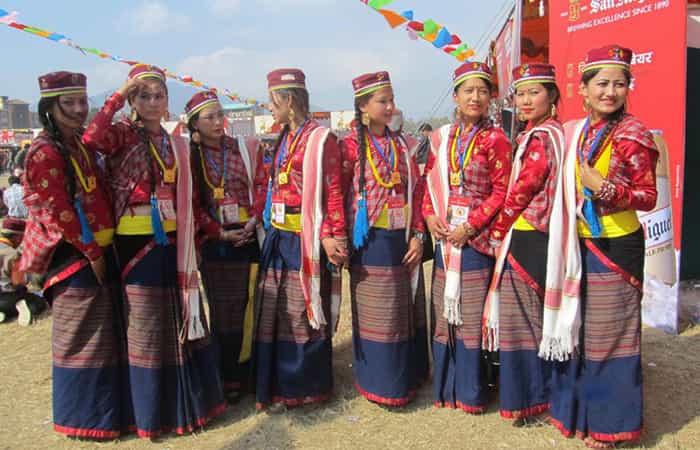 The Nepalese women wear the Pharia, a sari-like lengthy, garment embellished with vibrant patterns. The colors used on this garment are mostly yellow and red. The chaubandi cholo, a loose-fitting blouse with long sleeves, fastened beautifully on four corners is worn along with the Pharia. Majetro, an attractive shawl, Hembari, a floral patterned cotton cloth and Pacheuri, a head covering too are worn to complete the look. 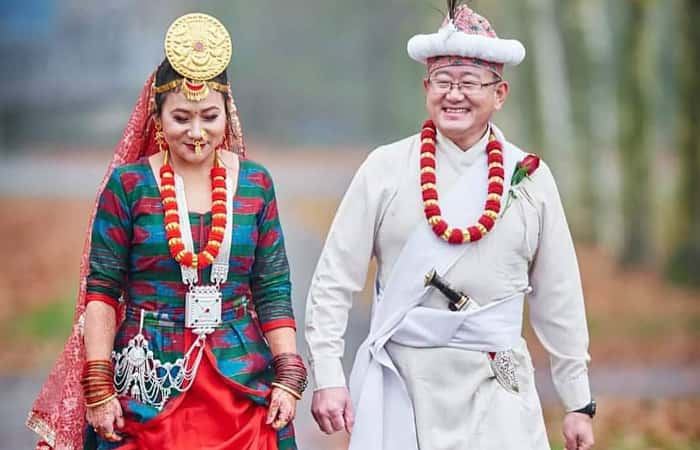 Dressing up in traditional apparels is an important part of the Sikkimese wedding ceremonies. Traditional wedding outfits of Sikkim are incredibly wonderful, colorful and vibrant. Finest clothes made of high quality silk are donned by the Sikkimese bride and groom. Their wedding attire makes a significant aspect of the wedding ceremonies as it signals the start of the wedded life of the couples. They look absolutely royal, decked in traditional clothing and jewelries.

‘Bakhu’ is worn by the groom. It is made out of cotton or wool. This coat-like attire comes with long sleeves and richly embroidered patterns that symbolize the groom’s masculinity. Baggy trousers, leather boots and a silken turban called the ‘topi’ are worn along with the Bakhu to complete the look of a typical Sikkimese groom.

The bride wears a colorful ‘Kho’ made out of brocade or silk. It is a gorgeous full-length gown with long sleeves, elaborate patterns and intricate embellishments. ‘Pangden’, a kind of apron too is worn along with the Kho. This apron too is decorated with stunning embroideries. Furthermore, the ‘Pangkham’ is used as a head covering by the Sikkimese bride. It is actually a large-sized multicolored scarf.

Pure gold jewelries are used to enhance the appeal of the Sikkimese bridal attire. Along with the traditional attires of Sikkim the locals love to sport some really fabulous accessories such as leather boots, belts and shawls. However, one of the most important accessories to complete the traditional look of a Sikkimese is the gleaming jewelries they wear. Jewelries crafted out of the seven metals are especially famous in the state. Bangles, bracelets, chains, finger rings, earrings, waistbands etc. are the common type of jewelries used. Precious stones, semi-precious stones and beads of different shapes, sizes and colors are mostly used on these traditional jewelry pieces.

Learn about the major types of traditional jewelries used by the three major tribes of Sikkim:

Namchok (earring), Lyak (necklace) and the Gyar (necklace) are the chief jewelry items worn by the Lepcha women. They also wear bracelets to adorn their wrists. The commonest metals used to craft these jewelries are gold and silver.

How Is Modernity Changing Things In Sikkim?

Across the centuries the clothing styles of Sikkim have gone through an evolution. Ancient clothing of the state was usually made out of hand woven cotton, silk and wool. These fabrics would be either beaded or embroidered to project the local traditions and culture. But new elements like synthetic textiles and modern abstract prints have come into the traditional attires of Sikkim in the recent times.

The people of Sikkim, no doubt, are recognized by the traditional dresses they wear. But, certain new things have been added to the traditional styles of Sikkim to give it a modern twist. New fashion trends have emerged under the impacts of modernity, thereby leading to these additions. Along with the traditional outfit of Sikkim, the natives of the state are now wearing the Jya Jya, a unique type of waistcoat. They have also started wearing the Kushen, a kind of jacket and the Shambo, a special kind of embroidered headgear. The inclusion of these new fashion elements has made the traditional attires of Sikkim look more graceful and attention-grabbing.

However, despite the inclusion of modern clothing styles and despite the state’s growing economy, there are still many natives who take pride in wearing the traditional Sikkimese garbs. It has been passed down from one generation to another to make sure that the state’s culture stays well preserved.

So, this is all about the traditional dress of Sikkim. If you wish to put on a traditional Sikkimese garb, do not hesitate. Sporting the stunning fashions of this small, charming hilly state is an experience you’ll never forget!