If you wish to gather detailed information about the Kedarnath Temple, read below:

Kedarnath Town of Uttarakhand is home to the famous Kedarnath Temple that lies in the Rudraprayag district. The temple stands magnificently along the banks of River Mandakini. The temple is 223 kms apart from Rishikesh, a prominent town of Uttarakhand, and is perched at 3583 meters above the sea level. At the temple’s backdrop, you can catch a glimpse of the mighty Kedarnath peak.

What Is The History Of Kedarnath Temple? 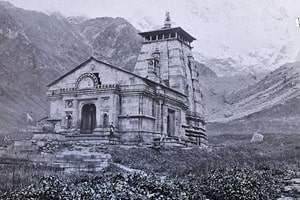 The temple’s history dates back to the era of the Mahabharata. In our ancient texts it is mentioned that after the fierce Kurukshetra battle, the Pandava brothers were struck by a sense of guilt for having killed their own kinsmen in the battle. For the purpose of sin ablution, they started worshipping Lord Shiva. But Lord Shiva was wrathful towards them and did not want to forgive their sins easily. However, later he was impressed by the dedication of the Pandavas and decided to wash away their sins by blessing them. At Kedarnath, Lord Shiva took the form of a bull and showered his blessings on the Pandava brothers. Another legendary tale states that when Lord Shiva was fleeing from the Pandavas, the elusive Shiva disguised himself as a bull. But Bhima, one of the Pandava brothers discovered the Bull’s original identity and tried to catch the Bull by its tail. It is then that the Bull’s body disintegrated into 5 parts- the arms appeared at Tungnath, the face appeared at Rudranath, the hair appeared at Kalpeshwar, the stomach appeared at Madmaheshwar and the hump appeared at Kedarnath. This explains why the lingam of the deity at the Kedarnath Temple resembles the hump of a bull in shape and form.

Out of gratitude towards the Lord, the Pandavas are said to have built the first temple of Kedarnath. This original temple was later restructured by the famous spiritual guru and philosopher Adi Shankaracharya around the 8th Century AD.

The temple of Kedarnath thus dates back to nearly 1200 years. In the ancient texts of Skanda Purana, a mention has been made of the Kedarnath Temple. It has been declared that it is here at Kedarnath that Lord Shiva released River Ganga from his matted locks.

Another Puranic narrative talks about Nara-Narayana. These two forms of Lord Vishnu spent many years in rigorous penance of Lord Shiva at the Badrikashram. Lord Shiva was pleased with their devotion and blessed them with a boon. It is then that they pleaded with the Lord, asking him to reside as a Jyotirlingam at Kedara.

As per geologists the temple of Kedarnath was cloaked in snow for as many as 400 years during the time period between 1300-1900AD; i.e. the Little Ice Age. 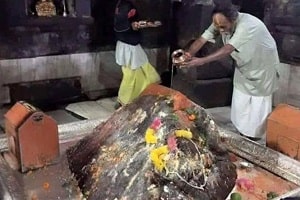 The Kedarnath Temple is constructed out of grayish stone slabs that are held together by means of iron clamps. The temple’s architecture is the best example of the interlocking technique. The construction of the temple did not involve the use of any mortar.

A pillared hall decked with statues of the Panch Pandavas and Parvati is situated in the front part of the temple. The hall inside the temple also showcases images of Draupadi, Krishna, Virbhadra (one of Lord Shiva’s guards), and Nandi, the Bull (Vehicle of Lord Shiva). Nandi Bull’s mighty statue at the temple’s entrance awakens a sense of deep spirituality in the visitors to the temple. It appears as it were the Bull stands as a guard at the door of the temple. The ‘Garbhagriha’ or altar chamber houses the temple’s deity, a conical lingam resting on a cylindrical pedestal rising to a height of 3.6 meters and of a circumference of 3.6 meters. A man’s face is engraved on the conical lingam and that makes the lingam look quite unusual. The spacious hall or mandap in the interiors of the temple is simply ideal for gathering and praying or meditating.

What Are The Timings Of Kedarnath Temple?

At 6 am in the morning, the temple opens up for Darshan. Between 3 pm-5 pm, there is a short afternoon recess. In the evening time, Darshan is allowed for the devotees until 7 pm. Everyday puja rituals at the temple starts with the Maha Abhishekam at about 4.00 am. At 7.00 pm in the evening, the rituals come to a close with the Shayan Aarti. Those who are visiting the temple before 3 pm are allowed to touch the deity but after 5 pm, devotees can only get Darshan of the deity from a distance.

The timings are as follows:

How to Reach Kedarnath Temple?

Those who wish to travel by air can take a flight to Dehradun’s Jolly Grant Airport located at about 238 km from Kedarnath. Regular flights connect Delhi to this airport of Dehradun. After reaching the airport one can hire a cab/taxi to reach Gaurikund. Gaurikund is well connected to Jolly Grant Airport of Dehradun via motorable roads. From Gaurikund, the trek route of 16km-18km to Kedarnath Temple starts.

If you are interested to travel by road, you can travel by buses to Gaurikund. Bus services connect Gaurikund to the rest of Uttarakhand. Buses to Dehradun and Haridwar are available from the Anand Vihar Bus Terminal and ISBT Kashmir Gate Bus Terminal of New Delhi. Upon reaching these two cities you can again take a bus to Gaurikund.

From Gaurikund you have to undertake an arduous trek to the Kedarnath Temple. If you do not wish to walk on the challenging mountainous pathway, you can hire machan, mule, or pony services.

After the devastating flash floods of 2013, the Gaurikund trek route was totally damaged and that led to the opening up of new trek route to the Kedarnath Temple. Pilgrims to Kedarnath Temple can reach the temple through Linchauli.

Also, two other alternate routes to Kedarnath Temple are as follows:

The first route starts from Chaumasi and ends at Kedarnath shrine, passing through places like Kham and Rambara. It is an 18 Km long trek route.

Another trekking route to Kedarnath Temple commences from Triyuginarayan and ends at the shrine. It is a 15 km long route.

What Is The Best Time to Visit Kedarnath Temple?

Just for 6 months of the year; i.e. from April until November, the Kedarnath Temple remains open for visitors. During the other months of the year, the region remains clad in snow and the weather during that time remains absolutely unsuitable for travel. Therefore, the most ideal time for a visit to the Kedarnath Temple is during the summer months; i.e. from April-June. During this time the temperatures are around 15 degrees centigrade. The weather happens to be pleasant and bearable. During the monsoons spanning across July and August, the region becomes landslides-prone. Therefore, visitors should avoid embarking on the Kedarnath Dham Yatra during the monsoons. Around September-October, you can travel to Kedarnath Temple. During those pre-winter months, temperatures remain bearable though the nights could be pretty cold. With the onset of winters, heavy snowing starts in the region. During that time, the deity is shifted to Ukhimath for its winter break and the Kedarnath temple is shut down.

Where To Stay In Kedarnath Temple?

GMVN Guest Houses, Dharmashalas, Ashrams, and tents are available to the Kedarnath Dham Yatris for stay and these accommodations come with decent facilities such as hot water supply, laundry, double beds, food, and the like. Some of the top-rated accommodations at Kedarnath Dham include Kedar Kantha, Swarga Rohini Cottages, Kedar Dome Cottages, Marwad House, Punjab Sindh Awas, Aggarwal House, and more.

What Is The Famous Food Of Kedarnath?

Local cuisine comprising of Kumaoni and Garhwali dishes are served at the Dhabas and eateries around the temple of Kedarnath. The foods are strictly vegetarian and are steeped in authentic flavors. Herbs, pulses, cereals, lentils, and ample amount of ghee are used in the local dishes. Some of foods you can sample during your Kedarnath Dham Yatra include Chaunsu, Kaafuli, Kode Roti, and the like.